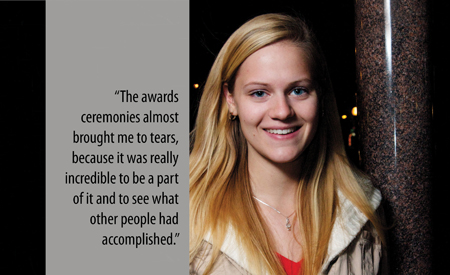 As the fifth of six children from Hinsdale, Ill., Laurie DeHaan found her source of motivation to excel as a student from words her father once casually spoke to her: “Failure is not an option.”

“I don’t know if he knew that those words hung onto me for so long; that they’re so triumphant,” says DeHaan, a CEE senior with a primary focus in construction management, a secondary in sustainability and a minor in the Hoeft Technology and Management program.

DeHaan initially applied to another university with the intent of majoring in architecture but realized that her interests aligned more with the civil engineering program at Illinois.

“CEE is so broad. There are so many different career paths that you can take,” she says.

DeHaan has done just that, excelling in her academics and contributing to the CEE community locally and internationally. She has been active in the Society of Women Engineers and Engineers without Borders’ Ntisaw Cameroon Water Partnership, once traveling to Cameroon for a three-week work visit. Currently, she is the construction manager of the Solar Decathlon China 2013 in partnership with Peking University. She is also the president of the Phi Sigma Rho Colony, a budding chapter of an engineering sorority that she founded on campus.

“It’s a group of girls that understand the engineering curriculum is really hard,” she says. “So we still get the benefits of having a social community while having a support system.”

Since her sophomore year, DeHaan has been recognized for her contribution and academic excellence through various scholarships, which she appreciates both for the financial help and for the recognition. But the value and significance of these accomplishments all came back to the person who motivated her in the very beginning.

“It was nice to be able to tell my dad, ‘you don’t need to worry about finances. I got this’,” DeHaan says.