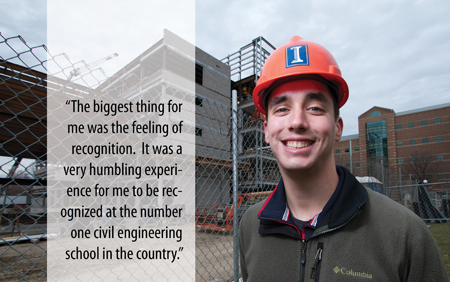 Ohio native Ryan Altemare applied to half a dozen schools as a high school senior, but receiving a scholarship at Illinois for out-of-state students with outstanding academic records made his first choice possible.

“I knew civil engineering was where I wanted to be, and Illinois, being number one, was my top target, but coming from out of state, it’s always more expensive,” he says.

Once here, Altemare’s continued excellence in the transportation program earned him two department scholarships which also offered him opportunities to do research and pursue independent study. That led to an interest in construction management, which became his secondary concentration.

“Aside from the financial benefits, the scholarships opened new doors that I might not have otherwise considered,” Altemare says.

After two internships with the Ohio Department of Transportation, Altemare learned he loved the atmosphere of the construction site.

“Out in the field in the middle of the action—it just really feels like that’s where my place is,” he says.

Altemare was accepted into the Global Leaders in Construction Management (GLCM) program and completed his master’s in the department in December. Last year he traveled to Australia with the program, and this January he will participate in another GLCM trip to Turkey. In March, he will begin a job in Houston with ExxonMobil Research and Engineering Company as a cost estimator.

While at Illinois, Altemare participated extensively in Engineering Council, serving on the committee for Engineering Employment EXPO, a massive, twice-a-year job fair held on campus. He twice served as director of the fair. He participated in the Illini Pride groups like Orange Krush and was a member of the student chapters of the American Society of Civil Engineers and Chi Epsilon, the engineering honor society founded at the University of Illinois.

Thinking back to his undergraduate days, Altemare recalls the department’s scholarship awards ceremony as motivating and particularly meaningful for him.

“It was a very humbling experience for me to be recognized at the number one civil engineering school in the country,” he says.