A group of students from the University of Illinois Urbana-Champaign joined students from Rutgers University for two weeks in West Virginia this summer, rebuilding a bridge severely damaged during a period of extensive flooding in 2016. The Illinois students, which included three students from the department of Civil and Environmental Engineering (CEE) and three from the department of Mechanical Science and Engineering (MechSE), are members of the Engineers in Action (EIA) Bridge Program registered student organization (RSO).

The EIA group typically travels to an international location every year to build a needed footbridge in a rural area, but this year a domestic location was selected because of the COVID-19 pandemic. West Virginia was a prime alternative because of the many bridges around the state washed out or severely damaged during the 2016 flooding. The team rebuilt one of these bridges, located in the small community of Lizemores.

“There were seven families that were impacted by the construction of the bridge,” said Lauren Horvath, a MechSE student who was Project Manager on the site and is the current RSO president. “Of the community members we talked with, a lot of them mentioned feeling unsafe crossing the bridge and feared one day it would collapse under them.”

It was more cost effective – and safer – to rebuild the bridge than attempt to renovate it, she said.

CEE at Illinois senior Helen Sun was president of the organization at the time of the project and the academic year leading up to it.

The Lizemores project took just two weeks to build, but preparing for it was a year-long experience for the group. Each chapter is responsible for the costs of their annual bridge project and travel, so the students spend the first semester of each academic year raising money for their summer project. This adds another layer of practical experience and skill that the students can achieve by participation in the group.

Under Sun’s leadership, for the first time the group was able to fundraise the entire cost of the project, meaning none of the students had to pay expenses out of their own pocket. This was particularly notable since the fundraising happened during the pandemic when “the economy was not great and companies were hesitant to support this type of trip,” Sun said. Fundraising taught her a lot about marketing, an area she found that she really enjoys.

“It helped me kind of change my career [plans] a little bit,” she said. “I'm going to get a bachelor's in civil engineering, but I'm also trying to go into marketing for construction technology. I really enjoy practicing and developing the skills to strategically forge partnerships and convince people to try a new product or service.” 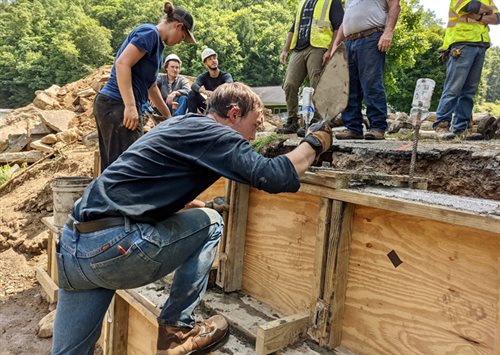 In addition to fundraising, preparing for the trip to West Virginia also involved taking a series of training courses to make sure they were ready for the project. These included a safety course, first aid training and general EIA Education courses the national organization developed, like the West Virginia Vehicular Bridge Program Course.

“This went over the logistics of the project, all the parties involved, surveying, the design and different loads and forces that are applied to a vehicular bridge, and more,” Horvath said. “It taught us how the bridge is built and how to calculate things like loads from cars and pedestrians on the bridge.”

Building a vehicular bridge was a first for the student organization. Jacob Dolas, a junior in CEE, served as Design Manager for the West Virginia project. Under normal circumstances involving a pedestrian bridge, Dolas – as Design Manager – would be responsible for developing the initial bridge design, which would be checked by professional engineers before any work happens. This year, the team followed an existing design that the engineers at JZ Engineering developed immediately after the 2016 floods.

“They already essentially had a working design ready,” Dolas said. “They made a design five or six years ago, when the big flooding event happened, that was really cost effective and all they do is tweak it a little bit for the specific site that it's going to be sitting on.”

The design was very simple: four steel I-beams spanning concrete abutments sitting on piles, topped with 2 in. x 6 in. wood boards turned on edge and nailed next to each other, Dolas explained. This made the bridge inexpensive, easy and quick to build. 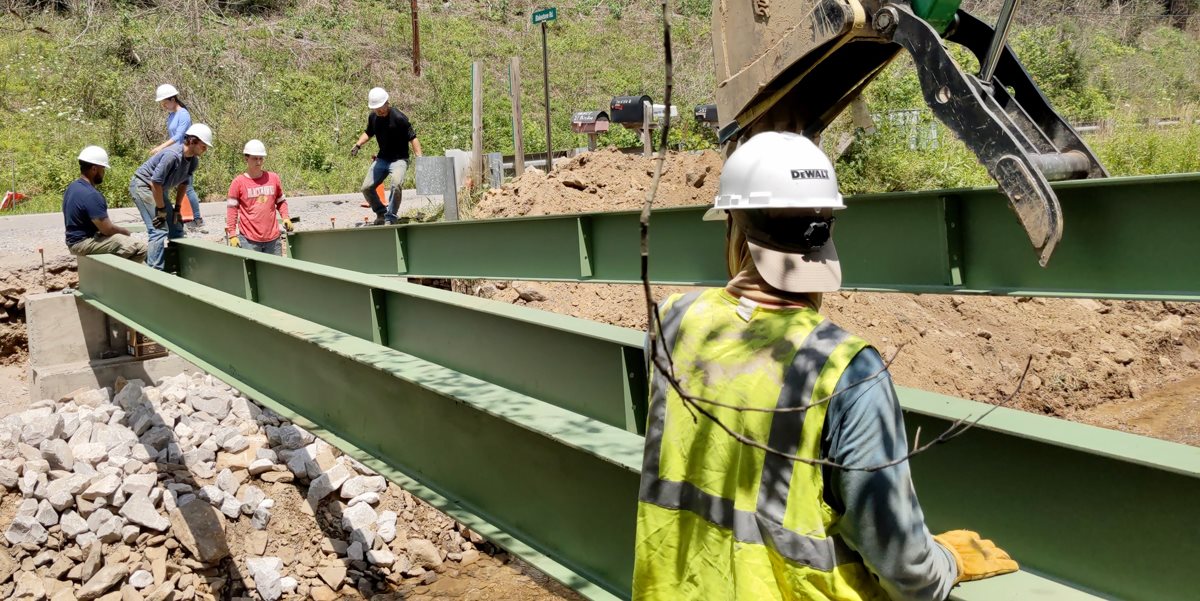 More from the EIA Bridge students

“As a sophomore, this project was my first opportunity to work on an actual bridge. I learned a lot of technical skills but I also learned a lot about working in a group and made many new friends. My favorite part was just getting to know everyone else in the group – they're some of the best people I've met at UIUC so far!”
– Emily Shao (CEE)

“As hard as the work was sometimes – you know, when you spend ten hours on a construction site in the 90 degree heat, it gets a little tiring – we'd always get back, we'd eat dinner, then we'd be playing sports or something like that. We'd be up all night basically. It really didn't feel like work, it was almost like a vacation with some construction built into it.”
– Jacob Dolas (CEE)

“My favorite thing about working on this project definitely had to be the group of people who I met in West Virginia. My teammates including students from the University of Illinois and Rutgers University created a funny, inclusive, and passionate environment which allowed us to be ourselves and bond both while building the bridge and in our free time.”
– Stratis Papageorgakis (MechSE)

“It was such a life changing experience. It was so awesome. You know, if you're here for engineering, you're going to learn about engineering. But you're going to get even more than that. The group of people is fantastic. You have such room for leadership and growing your abilities. Because that's encouraged here.”
– Lauren Horvath (MechSE)

“I actually went to Bolivia in my freshman year summer, and that experience was really transformative. I learned so much, not only just AutoCAD and technical skills, but I also really grew as a leader. I've learned how to prioritize work, prioritize for problems on a construction site, learned how to creatively problem solve, in situations where we don't have all these resources that we normally have in the States. And I'm also just learning how to communicate across not only language barriers, but also cultural barriers.”
– Helen Sun (CEE)

With the design ready to go, the students traveled to West Virginia where they learned what it was like to work on a construction site and build a physical structure. From gaining proficiency with power tools to putting in micropiles and rebar cages, the students acquired practical skills while putting into practice the concepts they had previously learned in classrooms.

“I might be a civil engineering student, but prior to this bridge I had absolutely no idea how bridges or the construction process worked,” said CEE student Emily Shao. “Our mentors on site taught me a lot about construction and what it's like in the industry.”

“I physically got to see how in the real-world, major projects like these cannot be done by a single person or even a couple of people,” said Stratis Papageorgakis, a MechSE student. “Not a single task in the bridge-build was done by only one person. Making the forms, cutting rebar, pouring concrete, decking, and many other assignments required multiple people at a time.”

You only live once

The students were unanimous in their opinion that the RSO is worth joining, whether for resume building, practical experience or social connections – or all three.

“Instead of just talking to people, I actually have things that I can put on my resume or remember if in the future I'm going to be designing a bridge,” said Dolas. “EIA is fantastic because it actually gets you doing things – and you meet people, too.”

“Last year was completely virtual for me so I struggled to make friends and meet people, but the people at EIA have been really welcoming and have given me fantastic advice,” said Shao. “As an organization it has also taught me a lot—I learned more about civil engineering and construction in one project than I've learned in my entire time in the classroom.”

Sun encourages other students to get involved with the EIA Bridge student group, noting that after graduation, a career and family will limit opportunities for this type of experience. With a laugh, she pointed out that when you are a grandparent, you can tell your grandchildren about “this one time I went to Bolivia and built a footbridge.”

“YOLO,” Sun added, using shorthand for ‘you only live once.’ “College is about trying new things. And this is the most YOLO thing – the wildest experience – you could try out.”

In addition to the students who contributed to this article, Raj Patel (CEE) and Nate Williamson (MechSE) also made the trip to West Virginia.