A recognized leader in geotechnical engineering and an expert in earthquake engineering and tunneling, Youssef Hashash has been teaching students at Illinois for 23 years.

When CEE geotechnical engineering professor Youssef Hashash was a child growing up in Beirut, Lebanon, his father worked as a hydrogeologist. Because the country’s civil war raged for much of his childhood, Hashash was sometimes forced to, as he puts it, “study from home.” This meant job shadowing his father and getting an early introduction to civil engineering. 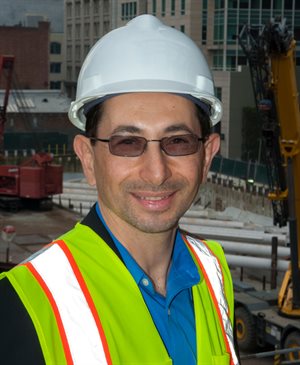 “In my teen years, I spent quite a bit of time on drill rigs, doing field explorations for dam sites and roadways,” Hashash says. “In my high school years, I did actual work; I did geotechnical site investigations whereby I would measure water levels, log test pits, perform field density tests, logging of core soil and rock – so it kind of got into my DNA. From there on, I went into civil engineering.”

Today, Hashash has been on the civil engineering faculty at the University of Illinois for 23 years, having joined the department in 1998. A recognized leader in the geotechnical engineering community and an expert in earthquake engineering and tunneling, he holds two endowed titles as both the William J. and Elaine F. Hall Endowed Professor and the John Burkitt Webb Endowed Faculty Scholar. DEEPSOIL, the software he developed, has become the industry standard for predicting how the ground will respond in an earthquake. He was lead author on a foundational paper published 20 years ago that is still the go-to reference in industry on its subject, “Seismic design and analysis of underground structures.” He has advised 28 Ph.D. students, all of whom have benefited from Hashash’s close relationships with industry which offer access to study state-of-the-art projects in process across the nation.

In 1985, Hashash left home to study engineering as an undergraduate at the Massachusetts Institute of Technology (MIT). Away from home for the first time, he struggled to adjust to a new language and culture. But life in Cambridge, Mass., was a revelation after an upbringing shaped by war.

“The constraints that were second nature to me were no longer there. It was an opportunity for me to grow, expand my horizons, learn and sort of slowly dip my toes in. It was a transformative experience for me,” Hashash says. “I got an amazing education and exposure, and it continues to shape me to today.”

Hashash was able to work on a number of research projects as an undergraduate. One was a study on the adoption of seatbelts in the New England area. At the time, seatbelts were not required by law.

“That was an interesting experience, because I had to go stand with a graduate student on roadway corners around Massachusetts, and we would be taking notes,” Hashash says. “Some people were curious and friendly, and other people had more colorful language to share with us! I learned about civic participation – that laws were not top-down but rather a consensus you build within a country. And I also learned what a banana split ice cream was.”

At the end of a long, hot day logging seatbelt usage, the graduate student would take Hashash to an ice cream parlor, where he first experienced the treat that still makes his eyes light up.

From industry to academia

He remained at MIT to earn his bachelor’s, master’s and Ph.D. degrees in civil engineering, completing his doctorate in 1992.

“There weren’t many jobs. I sent out 20 or 30 applications and received two interviews and one job offer,” he says. “But that job offer – I couldn’t have asked for a better choice.”

Hired by Parsons Brinckerhoff as an engineer on the Superconducting Super Collider Project in Dallas, Hashash worked on the high-profile project until Congress cut the funding in 1994. Still, he built relationships and gained real-world experience on underground structures, he says. After that, Hashash moved to San Francisco with Parsons Brinckerhoff, where he got his start in earthquake engineering, working on a number of seismic retrofit projects including the Big Dig in Boston.

“And then the opportunity came to move to Illinois,” Hashash says, when then-department head David Daniel and members of the geotechnical group invited him to join the faculty in 1998.

“People were advising me, ‘if you want to go into academia, this is the time to do it,’” Hashash says. “I wasn’t sure that this was really the right thing for me, but there were things I liked about the reputation of Illinois, for example the significant involvement of the faculty with real projects. I wanted the opportunity to step back and think about problems, but also I wanted the challenge of real-world problems instead of something theoretical or limited to a lab.”

At that time, the geotechnical engineering faculty at Illinois included Ed Cording, Gabe Fernandez, Pete Lenzini, Gholamreza Mesri and Tim Stark. Skip Hendron had just retired, and Youssef was assigned to the office Hendron had just vacated. The transition from industry was profound, he says.

“Oh my gosh, I was a nervous wreck in my first class!” Hashash laughs. “It was one of those things – you throw somebody in the swimming pool, and they sink or swim. I came in mid-year, so a lot of the programs that would have helped me transition in were not there. Currently we have far stronger programs for incoming faculty. Also I was expected to teach immediately. Now many of our faculty have a little bit of a grace period before they do that. At that time, start-up packages were tiny, so you were scrambling [for research funding] very, very early on, and it was stressful.”

Relief came in 2001 in the form of a prestigious national award, the Presidential Early Career Award for Scientists and Engineers (PECASE), which Hashash won for “developing an integrated research and education project that addresses a novel interactive visualization development and learning environment for material constitutive relations, referred to as VizCoRe.” The award came with five years of funding, which almost doubled his budget, plus a tour of the White House for recipients and a guest. Youssef attended with his wife, So-young Kim.

“My parents were in disbelief – utterly in disbelief – that in your adopted country, you can be an immigrant, and through merit you can actually get one of the highest recognitions you can get – and you get invited to the White House! They couldn’t believe it. They were absolutely in shock,” Hashash says. “I personally felt, ‘Wow, this is my adopted country, and I’m extremely proud for the opportunities that are given to any of us – which for immigrants in other countries is not always the case. This is a very, very unique place. It was amazing.”

Where Hashash has enjoyed making a mark is at the intersection of academia and engineering practice. He enjoys the discovery of research and seeing new knowledge applied in practice. Nowhere is that more immediate than in DEEPSOIL, a free software for predicting the ground’s response to earthquake motions that is continuously updated with the newest knowledge for immediate use in industry.

First developed more than 20 years ago with colleagues at UIUC’s Mid-America Earthquake Center, DEEPSOIL corrected errors in the fundamental aspects of numerical formulations that compromised the precision of the standard modeling software of the time. It enabled better modeling of how new designs would fare in the event of an earthquake and captured the non-linearity of soil response due to more severe quakes – something the software of that time could not do.

“DEEPSOIL has become a platform for immediate dissemination of our research,” Hashash says. “I was fortunate through the years to have talented students to help me continuously update it. Sometimes we would put our findings into the software, and it was available for release even before the papers got published. It’s a service to the community and for increasing seismic safety. It really goes to the heart of our mission as civil engineers in terms of developing tools, procedures and methods, and educating students to enhance safety.”

Hashash enjoys wearing the many hats of his profession: academic, teacher, researcher, engineer.

“That is what made me come back from industry into academia,” he says. “Working with students and seeing the students bringing in these new ideas, new methodologies to bear on old problems, is something I really enjoy. It gives you a sense of discovery, renewal. By connecting with our colleagues in industry, it also gives us a sense of relevance. I find it really enjoyable to see the work that we do being used. We don’t have to wait 10, 20 years to see our work being employed. Sometimes within months of our development through our contacts with industry we start seeing applications of our methodologies. And vice versa – through our connections with our friends in industry, we sometimes find that they are ahead of us, and there is something to be learned from them because they are working with real-scale problems.”

The ability to study projects as they are accomplished has enhanced Hashash’s research as well as the education of his students. A recent project has him collaborating with the Los Angeles Metro expansion project to collect data on the construction of tunnels for new lines and underground stations. The project highlights one of Hashash’s areas of expertise – construction in heavily built, urbanized areas while limiting impact to surrounding structures. Using advanced tools including deep learning and artificial intelligence enables Hashash’s team to correlate the massive amount of data they collect – for example, from tunnel boring machines with numerous sensor streams.

Hashash is quick to credit the top-quality graduate students that Illinois attracts for the much of the success of his research program. He praises their dynamism and the fresh perspective they bring, as well as the richness of their collaborations with one another. When they graduate and go on to work as civil engineers, he enjoys seeing their professional achievements.

“It is absolutely wonderful to see them being successful and making their mark on the profession,” Hashash says.

Recently Hashash was named to a team of forensic engineering experts who will conduct a technical investigation into the June 24, 2021, partial collapse of the Champlain Towers South condominium in Surfside, Fla., for the National Institute of Standards and Technology (NIST). He will co-lead the geotechnical engineering-focused project with Dr. Sissy Nikolaou, leader of the Earthquake Engineering Group in the Materials and Structural Systems Division in the Engineering Laboratory at NIST.

The investigation of the tragic collapse to illuminate what went wrong and how to prevent it in the future is Hashash’s most recent involvement in a long history of service on post-disaster reconnaissance teams documenting the built infrastructure’s response to earthquakes, floods and explosions. Such service speaks to his philosophy of being engaged and employing the best tools of the time to advance the geotechnical engineering profession – a viewpoint he hopes to impart to his students.