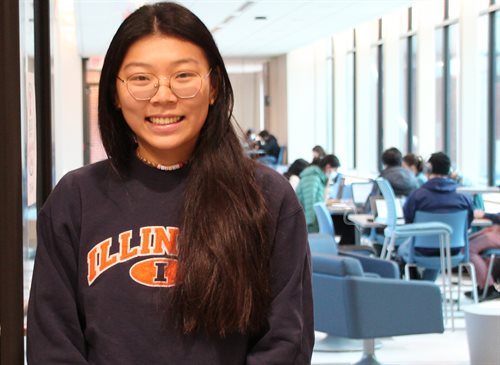 When Cici Teng was a high school student deciding between a college in California and a college in Illinois, UIUC’s reputation as a top research school tipped the scale. With advice from her father, who convinced her that a strong research program meant the school would have a lot of resources and “really, really cool” professors, Teng gave up thoughts of spending her undergraduate years near a beach and instead moved to the heart of the Midwest.

Now a senior in CEE at Illinois, Teng knows that having research experience under her belt will help her in graduate school. This year, she is working with assistant professor Hannah Horowitz as part of CEE’s Research Experience for Undergraduates (REU) program. Their project is focused on better understanding the sources of sea salt particles in the atmosphere in polar regions – particularly those released from cracks in frozen seawater.

“From her analysis we hope to learn in what regions and months are sea ice leads most prevalent, and whether this is changing over time,” Horowitz said. “Then we can use the information from the satellite data in a computer model of the atmosphere to estimate the emissions of salt particles from the sea ice leads.”

Teng said it is really interesting to apply her coding and research skills on a project that she cares about.

“Climate crisis is what got me into environmental engineering,” she said. “I realized the classes I’d taken were more water quality focused, or just not really what I wanted to do, until I saw her research and I was really interested.”

It was intimidating as a freshman and sophomore to reach out to professors to ask about research opportunities, Teng said, but being persistent paid off. Now, she has a close relationship with Horowitz and considers her a mentor. Learning what research actually entails has also been an invaluable lesson, noting that before this project she did not fully understand what research meant – how a project gets started, the passion and time researchers can spend on a single topic, or any of the associated details.

“Now I feel really encouraged to be able to look into new things that are completely outside of my knowledge base, and then being able to figure out steps to answer questions that I’m really interested in that no one else has the answers to,” Teng said. “That’s the coolest part of our research for me.”