Students in the Global Leaders in Construction Management program spent eight days in Rome this summer, learning about construction projects both ancient and new.

A group of CEE at Illinois students recently had the unique experience of exploring the long history of construction engineering in Italy, through a week-long trip to that country as part of the Global Leaders in Construction Management (GLCM) program. The students saw examples of construction projects up close, with visits that ranged from the ancient Roman aqueducts to a modern subway construction site.

International trips such as this one are a key component of the GLCM program, which is currently led by E.J. Ignacio, an instructor in CEE at Illinois.

“There are two main goals for GLCM trips: educate and inform,” Ignacio said. “First, we want to educate students on the construction management techniques used in other countries and the means and methods used to perform similar activities that they will encounter in their careers. Second, informing students how the skillsets they’ve developed at UIUC can be utilized in different locations and industries, and present global opportunities.”

The experience began when the group touched down in Rome on May 17, 2022. Their first day included visits to some of Rome’s most famous historical sites, including the Pantheon, Forum and Colosseum. Other days saw them visiting active jobsites, taking the high-speed train to Naples, exploring Fascist-era architecture, walking through a more modern working class neighborhood that grew out of the 1960 Olympic Village, touring the site of an ancient city outside of Rome called Ostia Antica, and more.

The class trip was hosted by Gustolab International and the Borromini Institute, which partners with UIUC on study abroad programs. Institute Director Tom Rankin led the group throughout the trip and, in combination with CEO/Founder Pier Alberto Merli, created a successful academic and cultural experience for the students, Ignacio said.

Established in 2005, the GLCM program combines a rigorous Construction Engineering and Management curriculum with in-depth exposure to the practice of engineering. Students enrolled in the GLCM program are provided with a summer internship opportunity and visits to domestic and international construction sites. Ignacio has led previous trips to London (2019) and Austria (2020), and is already planning the 2023 class trip to see the Panama Canal expansion work that is currently underway.

The students visited two active work sites in Rome: the Mausoleum of Augustus and the Metro C Subway construction. One common aspect of construction projects in Rome is the uncovering of historical structures on the active jobsite. Each time this happens, archaeologists are called in to examine, excavate and preserve or remove the ruins. Ignacio explained that since Rome is basically built on a series of layers – medieval structures are built on byzantine structures which are built on top of ancient imperial Rome – this process can add months or years to the construction process.

“We learned that in Italian construction, completion dates are often pushed back or delayed due to unexpected archaeological findings during excavation,” wrote Michaela Patton in the trip blog. “Designs are constantly altered in order to preserve and account for any ruins. As a result, construction culture is more relaxed than in the United States when it comes to design modifications that must be made during construction.”

The Mausoleum project involves adding a piazza, museum and stairs to showcase the ancient structure. Student Zack Gold noted in a blog entry that archaeological work had been completed – and construction is moving forward – on half the site, while the rest of the site was still in the dig stage.

“In this site, mosaics can be seen,” Gold wrote. “As it turns out, these are from the Middle Ages, when people had moved near the Mausoleum. We were amazed at how well preserved these were, and even more amazed that the cultural superintendent, a branch of the government who “owns” any historic items, decided to simply remove it. This decision was made because Rome has artifacts from around 100 A.D, so they do not feel the need to preserve everything from the 1500s.” 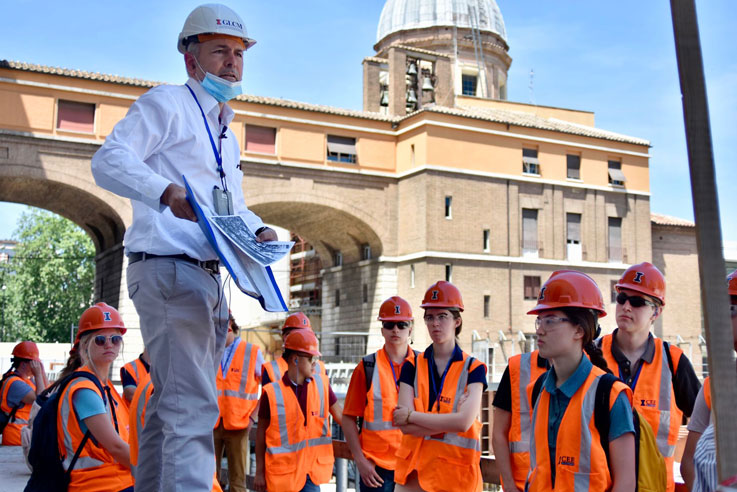 More highlights from the trip

The students visited and learned about the ancient aqueduct system that carried water from the mountains into Rome and throughout Italy, including the famous Claudio aqueduct and ground-level aqueducts that are still active, albeit with non-potable water.

The group saw many examples of modern architecture in Rome, including the MAXXI Art Museum, designed by award-winning architect Zaha Hadid.

During a trip to the Mariotti travertine workshop, Fabrizio Mariotti showed the group the manufacturing process by which rough blocks of stone from nearby quarries are turned into ready-to-sell slabs of marble.

There were plenty of opportunities for fun and cultural experiences. On their free day, students explored the city on their own, including shopping and sightseeing. Food was thoroughly enjoyed throughout the trip, including plenty of gelato and pizza. 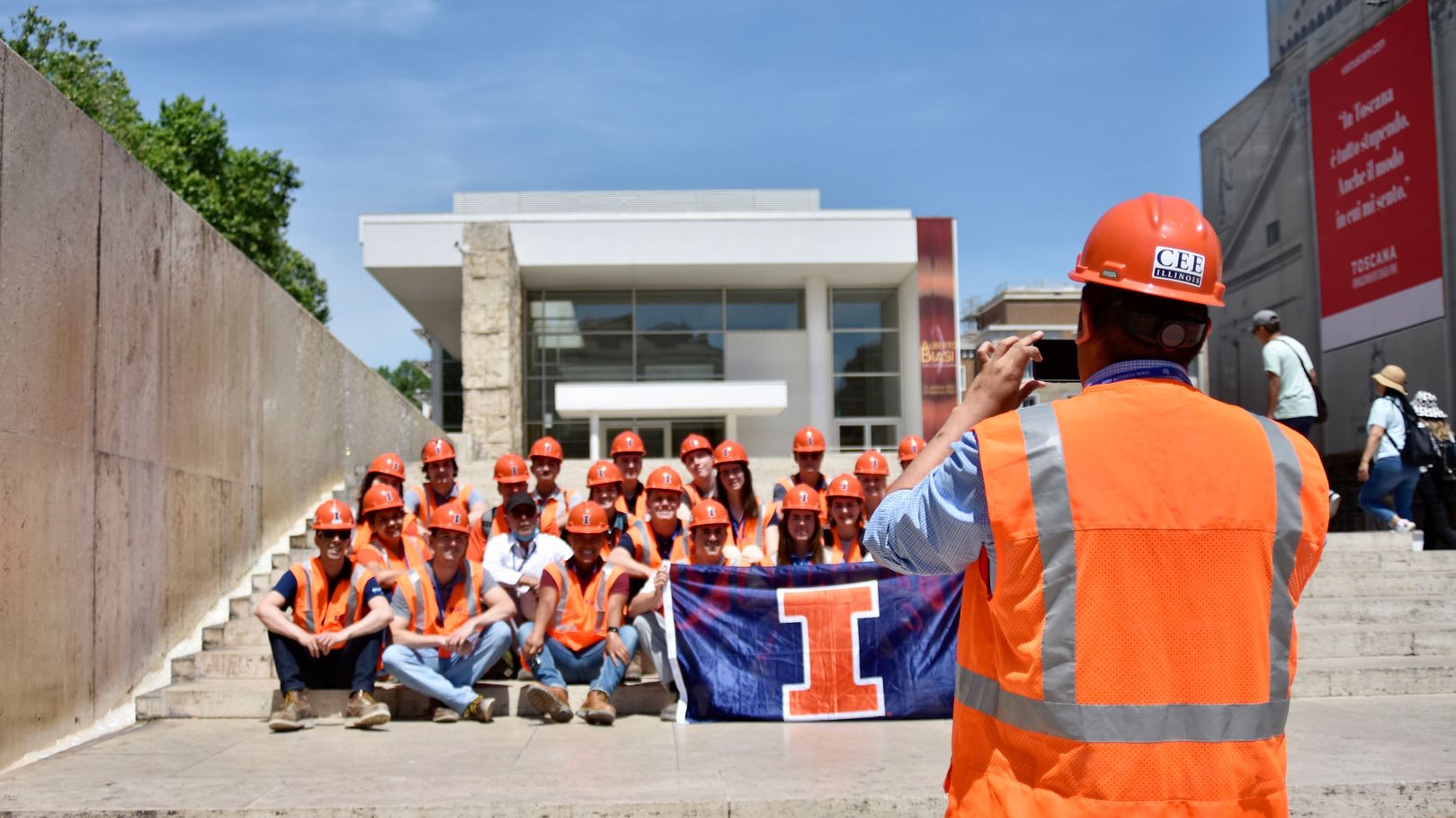 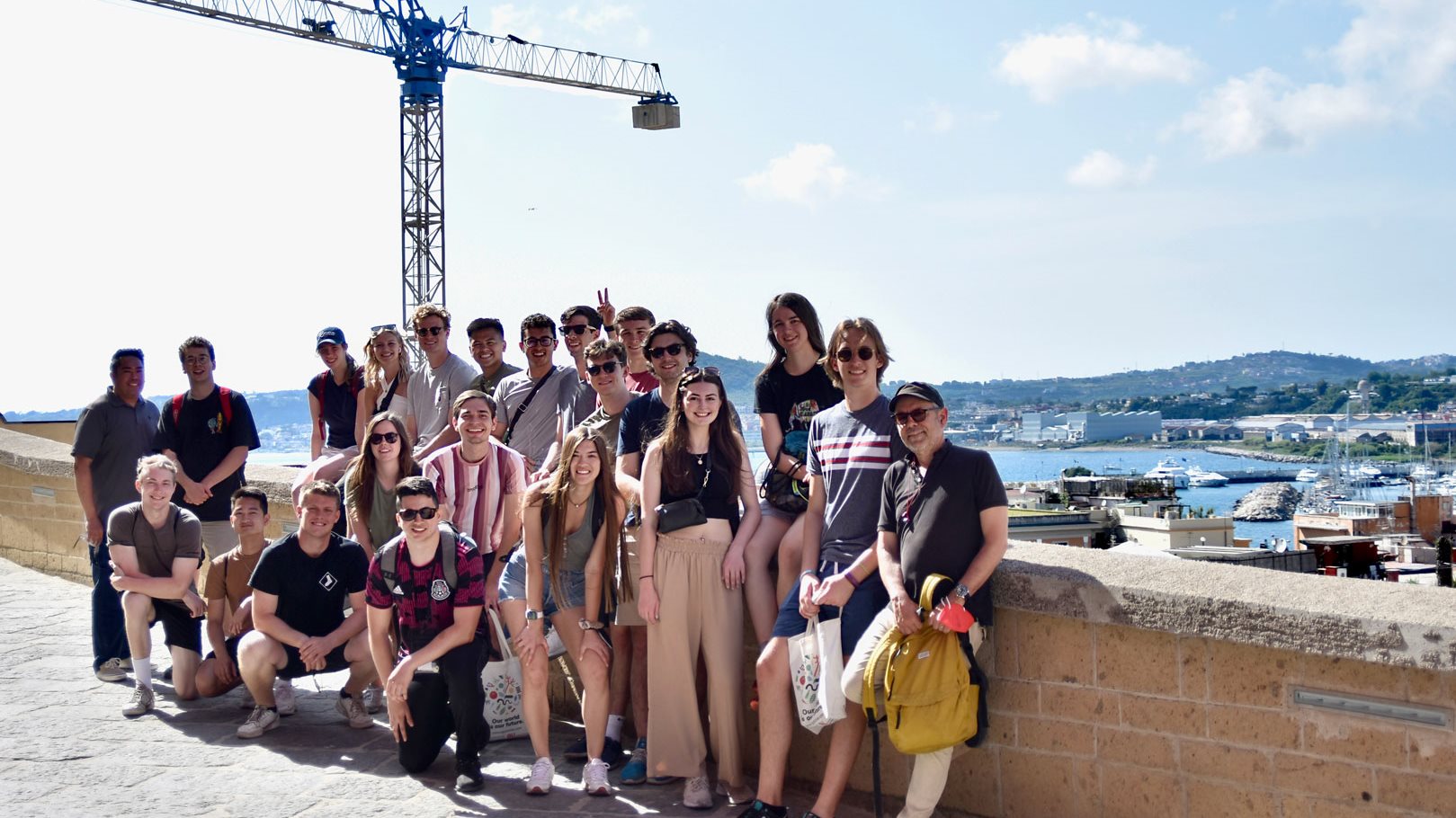 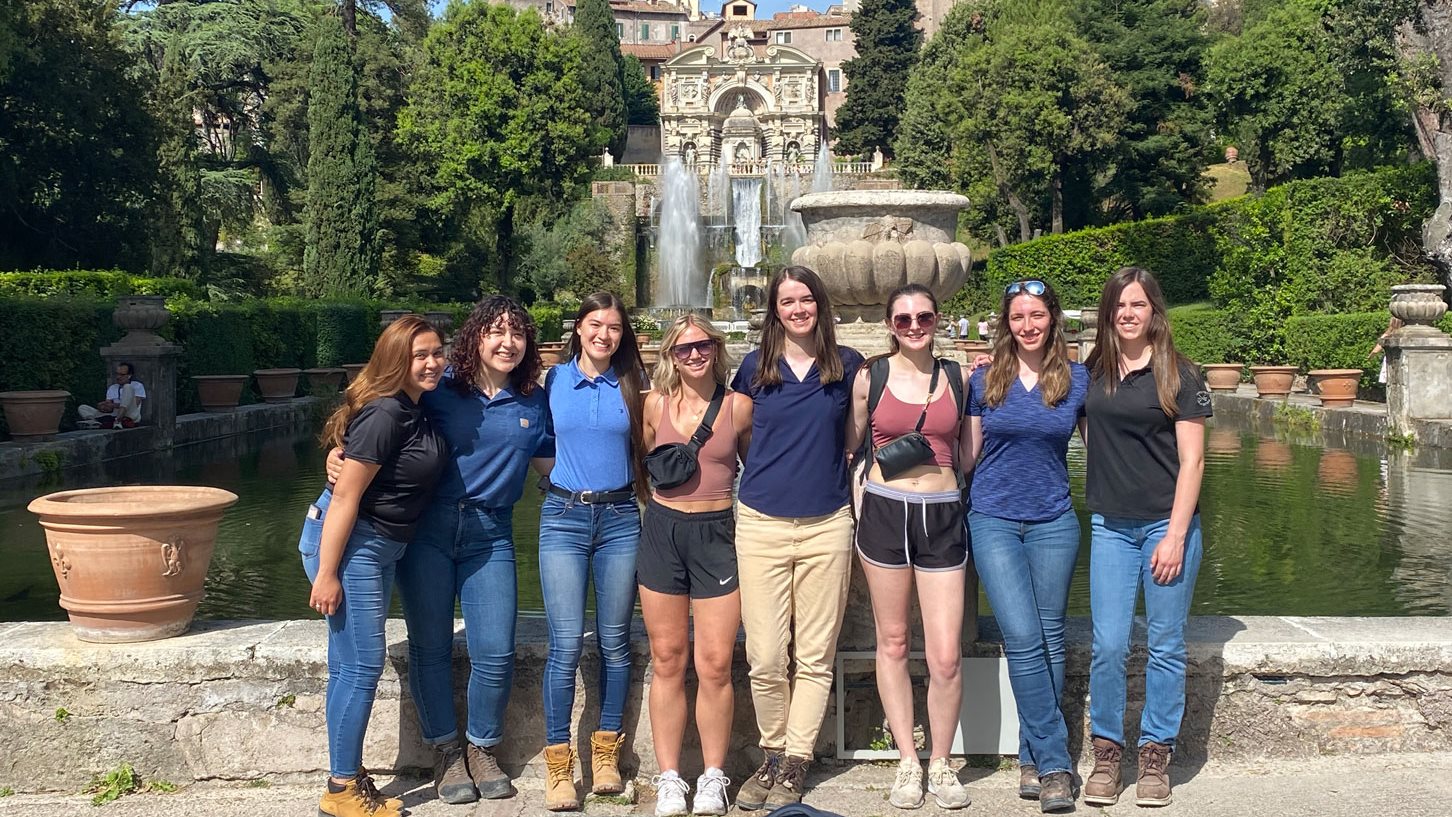 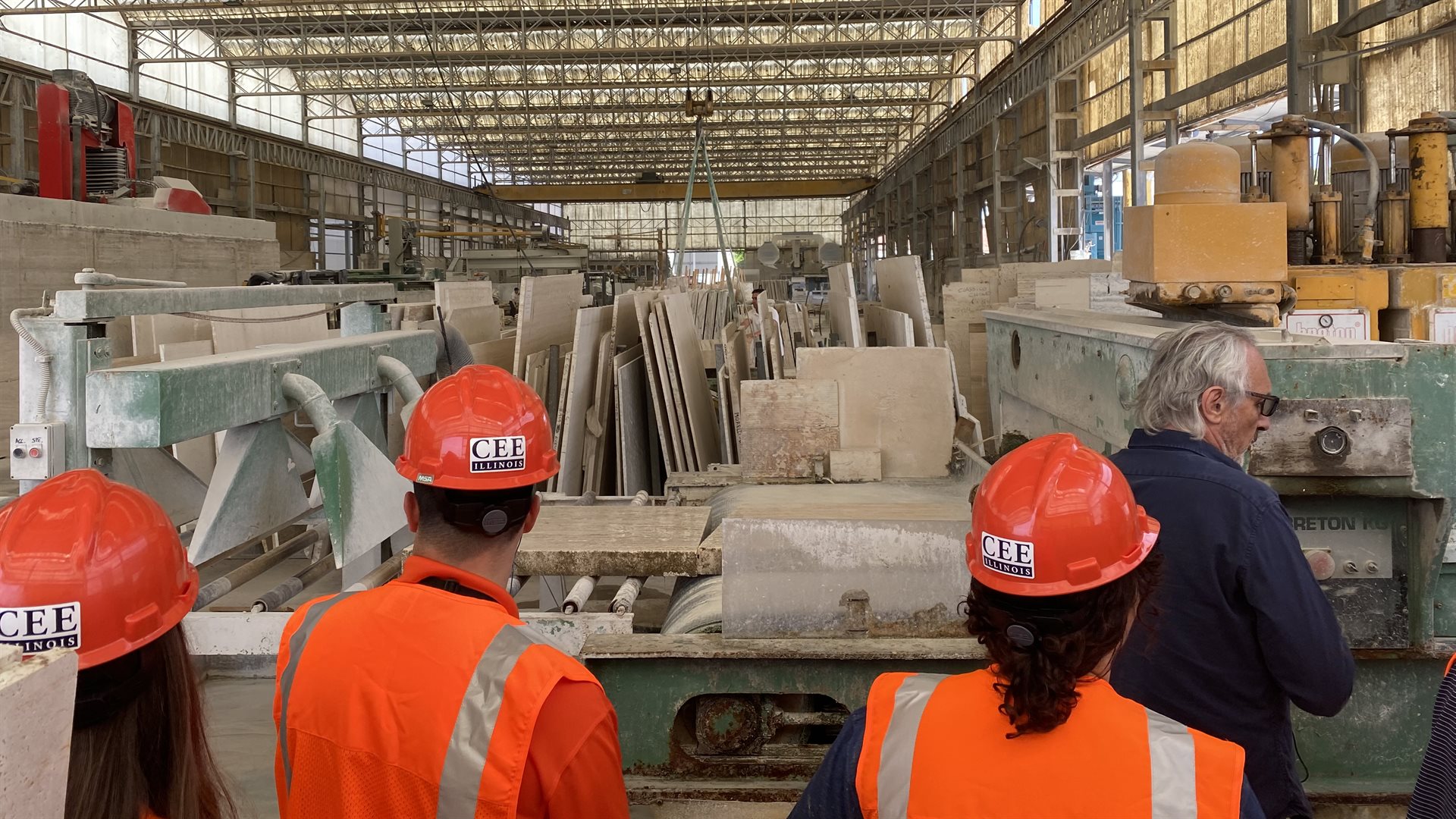